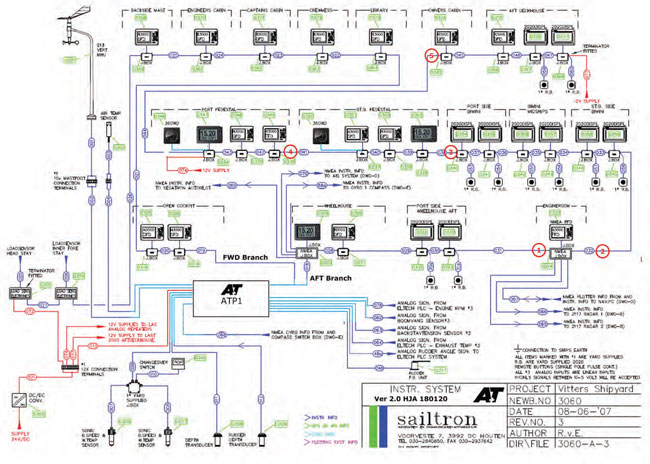 In the April issue we discussed how fast and easy it is to effect an electronics system upgrade, where new A+T displays and processors can compatibly fit to replace unreliable, ageing and outdated equipment on a performance-orientated sailing yacht. The new instruments installed on the framework of the existing system bring an entirely new modern experience to the users as both a better and much more cost-effective alternative to completely replacing the old system.

In superyachts, aesthetics are an important consideration to maintain the carefully crafted look of the boat, while the functionality and reliability of the electronics system on board is a critical factor. Modern superyachts simply cannot operate unless the integrity of their complex PLC (programmable logic computer) systems is completely assured.

The huge burst of superyacht construction in the early 2000s resulted in many originally-installed systems reaching the end of their useful lives and there comes a time when an upgrade is needed.

Main picture: this wiring diagram for the Hoek designed superyacht Anne shows the immense complexity of the electronic systems that yachts of this size rely on. This system includes 30 display units, three load cells and a very wide range of data inputs including analogue signals

‘These systems were good in their day,’ says A+T’s Hugh Agnew, ‘but for the same reasons that no one uses a 10-year old mobile phone or laptop, these old instrument systems should be replaced with a modern system that is faster, has more features and is more reliable.’

An apt illustration of this replacement process on a superyacht is the upgrade to the instrument system of Anne (ex-Erica XII), a beautiful Hoek/RWD 53m sloop built at Vitters in 2009, originally fitted with a large 30-display system and a wide range of interfaces.

Over the course of 2018 and 2019 some displays had been upgraded to A+T replacements as needed. Then in early 2019 the decision was made to upgrade to the A+T ATP1 processor.

This would not be a trivial job, due to the size and complexity of the system: 30 displays, three load cells and many data inputs with analogue channels including engine and propulsion functions such as propeller pitch, engine speed (RPM) and exhaust temperature.

The ATP1 processor would have to also interface with the PLC and bridge charting systems, which are crucial to operating the whole yacht, including sail trim, backstay tension, boom position and reefing. The operator of these functions, being push-button controlled on a vessel of this size, has little “feel” for the loads and settings, so they are completely dependent on receiving reliable wind, load and other information from the instrument system. 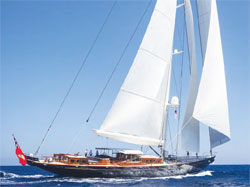 Above and below: the requirement to respect the exquisite craftsmanship and classic aesthetic of a yacht like Anne when installing new electronic instruments can add significant costs to the installation. And with a sailing programme that includes long ocean passages and cruises in far flung parts of the world, the availability of totally reliable support for key electronic systems is a crucial factor 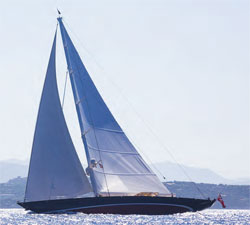 ‘An estimate for a new N2K-based system would have cost just over €50,000 plus carpentry to change the display mounting holes and the need to open all the headliners, ducts and bulkheads to run new cabling,’ says Agnew, adding that ‘the A+T upgrade was €15,000’.

After a week for installation Anne now had a system with better performance, superb engineering and great support, which was little needed throughout a trouble-free Med summer season.

Original installation was carried out in early 2019 by Ronald Bunders of Tijssen in Palma, a recognised expert in instrument systems. A+T support was needed however, while Anne was on a delivery to the Caribbean in late 2019. Parts of the display system had started “freezing”, a conditon which will be well known to many yacht captains and crew.

A+T visited the yacht in Antigua in January 2020 and within a few hours, using the built-in diagnostics, a rogue broken gauge was found to be pulling down the whole system.

After a quick replacement with a new A+T display, the entire system was checked and confirmed to be working well before the yacht left a few days later bound for South Africa and then on to the Indian Ocean. ‘The system has worked flawlessy since A+T’s visit,’ says Anne’s captain Nick Jackson.

Besides Anne, A+T processors and displays have been used to upgrade the electronic systems aboard a wide range of other superyachts such as Adix, Marie, G2, Symmetry, Stay Calm, M5 and many more.

Agnew summarises their support commitment as ‘being here for a long time, not a good time.’ He says: ‘we are always happy to help yachts with their instrument systems, whatever the issue, both before they become customers of A+T and after’.