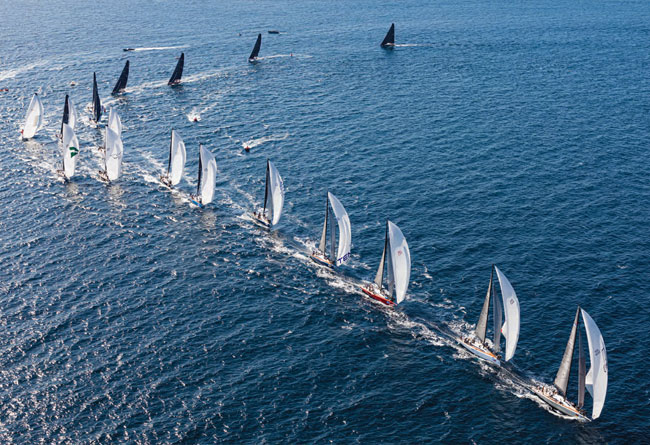 The second edition of The Nations Trophy attracted teams from 14 countries... and an impressive turn-out of the world’s best sailors

The second edition of The Nations Trophy, from 8 to 12 October, was a storming success that cemented the position of Nautor’s Swan’s biennial headline event as one of the world’s foremost owner-driver one-design yacht regattas. Many top professional sailors came to race alongside impressively skilled amateurs. To quote North Sails’ president Ken Read, the tactician aboard the ClubSwan 50 Cuordileone, ‘It is a testament to a lot of people taking the event seriously’.

Not only that but it marks the welcome return of nation-versusnation yacht racing, which used to be a hallmark feature of many classic regattas. With 14 countries represented in The Nations Trophy, the concept clearly has broad international appeal. The previous winners, Spain, were back to defend their title against teams from Austria, Belgium, Croatia, Finland, Germany, Italy, Netherlands, Norway, Romania, Russia, Sweden, Switzerland and the United Kingdom.

Held for the second time in the excellent natural yacht racing arena of Mallorca’s Palma Bay and hosted once again by Real Club Náutico de Palma (RCNP), The Nations Trophy 2019 attracted the largest ever gathering of Swan one-designs. Some 41 yachts competed in four classes with world and European championship titles at stake.

There was an impressive turn-out of 18 ClubSwan 50s, which made for an amazing spectacle on the start line. With the class world championship title up for grabs most teams had hired top professional sailors to join their crews: Bouwe Bekking was on Niramo, Iker Martinez on Mathilde, Chris Larson on Earlybird, Jochen Schümann on OneGroup, Pietro D’Ali on Drifter Sail, Fernando Echávarri on Skorpios and Cameron Dunn aboard Bronenosec, to name but a few.

Main picture: the 18-strong fleet of ClubSwan 50s made a magnificent sight on the Bay of Palma crewed by many of the worldʼs best sailors including Olympic gold medallists, Americaʼs Cup veterans along with numerous world champions

The racing in the seven-boat Swan 45 fleet, also competing for world championship honours, was thrillingly close all the way through the regatta. A strong entry of 12 ClubSwan 42s for their European championship showed the enduring popularity of that class and guaranteed intense (but friendly) competition. And the event was also a major milestone in the evolution of ClubSwan one-designs with the widely anticipated racing début of the brand new, next-generation ClubSwan 36, four of which turned up for their first regatta.

Racing on Day One was delayed by the fickle breeze and when it got under way there were some surprise winners. In the ClubSwan 50 class, two boats – Dmitry Rybolovlev’s Skorpios (Russia) and Cuordileone (Italy) owned by Nautor’s Swan president Leonardo Ferragamo – led the fleet most of the way around the course in a closely fought duel. On the last leg, however, a bold tactical play by Ross Warburton’s Perhonen (Great Britain) overtook them to win the race.

‘We were in third place at the last upwind mark and then, heading downwind, we extended further out to the right-hand corner picking up a little bit of a shift before we gybed back,’ Perhonen’s tactician Ian Budgen explained. ‘The average wind angle had been around 200°, but after we gybed it went to about 215-220° and we got about 10-15° on the two boats ahead.’ It was a calculated risk. ‘I thought they had gybed too early,’ he said. ‘We had seen better angles on the previous upwind leg and we were not going to win a three-boat race to the line. So we left the other two to their race and hoped for a bit of luck. We had sufficient separation from the boats behind, which made it less risky.’

In the ClubSwan 42s, Andrea Rossi’s Mela (Italy) came out on top. ‘Today was really difficult with the light wind jumping about a lot,’ he said. The key to Mela’s victory was a clean start, which got them to the windward mark with a good lead. ‘We took the opportunity to go left,’ said tactician Enrico Zennaro. ‘Then with one tack we laid the mark and found we were in front by more than a minute. We had clear air for the rest of the race, a big margin over second place and no choices to make except how to stay between the fleet and the next mark.’

It was Leonardo Ferragamo’s vision that drove the development of the radical C-foiling ClubSwan 36, so it was fitting that the first-ever race for these exciting new boats was won by the younger generation of the Ferragamo family, sailing Thirty-Six (Italy). ‘We only started training on Tuesday so we haven’t had that much time together,’ said Riccardo Ferragamo. ‘But the boat is great. It’s like going back to sailing a 420 dinghy.’

Day Two saw the fleets chasing zephyrs on a windless Bay of Palma. After several course changes racing was abandoned for the Swan 45s and ClubSwan 42s, while the 50s and 36s persevered. The Spanish navy’s ClubSwan 50 Aifos 500 pulled off a remarkable win in the light airs after crossing the line early and having to go back. ‘This only happens a few times in a sailor’s life,’ tactician Antonio Piris explained. ‘Our only option after we were over the line was to risk everything on one corner of the course. It was the right corner with a very big shift to the right and that put us in second place at the first windward mark.’ On the downwind leg they got past the leader, King Harald V of Norway’s Fram XVIII. ‘The approach manoeuvre to the gate seemed to come too early for them and they went into a light patch,’ Piris said. ‘There were two more changes of course but we were able to hold our own.’

Croatia’s Go Racing scored their first victory in the ClubSwan 36 class. ‘Great teamwork in demanding conditions paid off,’ said helmsman Christian Pavić. ‘We learned a couple of important things for light winds today,’ added tactician Ivan Kljaković Gašpić, ‘like when to use the C- foil, tension on the lowers, uppers and runners. It’s a very active boat. As little as two kts more wind can mean a big re-trim.’

Day Three delivered the powerful sea breeze everyone had been hoping for. Skorpios (Russia) dominated the ClubSwan 50 class. The Finnish Swan 45 Blue Nights helmed by Tea Ekengren-Sauren topped the class leaderboard at the end of a hardfought day, just ahead of defending champion Porron IX (Spain) and Motions (Netherlands). ‘We weren’t doing anything mysterious, we just worked very hard,’ she explained. ‘The starts were extremely important. It is really hard to get a good race if you mistime the start.’

Above: the dramatic new C-foiled ClubSwan 36 class makes its racing début.
Below: in 2019 Italy beat 13 other national teams to win the regattaʼs top prize, The Nations Trophy. 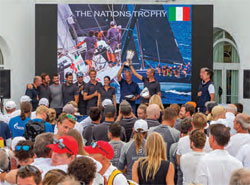 The last day was a dramatic finale that challenged the sailors’ boathandling skills. With big waves and a strong, building wind the action was compressed into just one race for each class. Mark roundings were fiercely contested as the crews gave it their all. In the ClubSwan 50s, fifth place was enough to score Skorpios a comfortable win – and the world championship title. ‘We had good performance all week,’ said Echávarri. ‘The numbers from the boat were fine, the trimmers were super, but what paid the most was that we had really good starts.’

The closest competition was in the Swan 45 class, where the first, second and third-placed boats were all tied on points at the end of the regatta. After winning the last race by a narrow margin, Klaus Diederichs’ Fever (Germany) took the world championship title from Motions (Netherlands) and Blue Nights by having more first-place finishes than his two rivals. ‘We had bad luck with a disqualification yesterday,’ Diederichs said. ‘I told the crew to forget about it, today we are going to show them.’

Andrea Rossi’s Mela (Italy) dominated the ClubSwan 42 class throughout the regatta and went home as well-deserved European Champions. They sailed conservatively in the last race and finished fifth, still with five points to spare. ‘The other crews are really good but our tactician, Enrico Zennaro, did a great job especially when we were suffering,’ Rossi said. ‘He got us out of some bad situations.’

The last day showed the awesome potential of the ClubSwan 36 in stronger winds. With four wins in six races, Riccardo Ferragamo’s Thirty-Six (Italy) emerged as the clear event winner. As more teams join this exciting new class, the pressure will be on to defend their success and results against a much larger fleet in two years’ time.

As for The Nations Trophy itself, Italy came out on top – just two points ahead of Germany and Russia. And while the winners celebrated their hard-won victories, yacht racing industry leaders toasted the success of the regatta. ‘It’s a very interesting and extraordinary event,’ said Juan Kouyoumdjian, designer of the current ClubSwan Yachts. ‘It is the culmination of a lot of effort in both design and organisation… and the way to measure its success is the smiles on the faces of the sailors.’ Ed Reynolds, president of Quantum Sails, said: ‘With the new ClubSwan 36, you no longer need to be an America’s Cup level sailor to experience this level of extreme performance.’ And North Sails’ Ken Read summed it up neatly: ‘The owners are having a blast, the crews are highly competitive, it is just a wonderful mix of everything that is good about sailboat racing.’