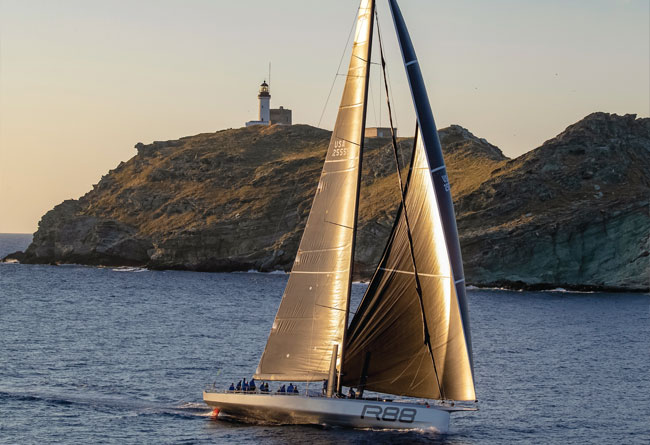 Upgrading the world’s fastest superyachts with the latest and lightest grand prix carbon rigging is no place to be discussing tolerances...

Rigging a large, high-performance yacht is always going to be a major undertaking. It’s a complex engineering challenge with millimetre tolerances in cables measuring more than 50 metres in length and – if you’re serious about performance – the cable ellipse profiles are individually tailored for optimal performance across a range of wind angles. Tight, collaborative project management is paramount whether you’re retrofitting new cables to a yacht’s existing mast or designing a set of standing rigging for a new-build mast. That said, yacht owners and crew who have upgraded to Carbo- Link rigging tend to find the process a lot more straightforward and the benefits easier to realise than they initially expected.

Two notable racing yachts that have recently been down this route are Galateia, a 100ft Wally which is optimised for fast-paced superyacht regattas and Rambler 88, the coastal and ocean racing maxi. Both yachts were in major refit mode, with owners and teams looking to improve performance with leading-edge, proven and reliable technology. ‘Carbo-Link worked very closely with Galateia and Rambler’s permanent and race crews right from the start,’ says Carbo-Link’s James Wilkinson. ‘That was crucial to understand the specific requirements and parameters of each project and to ensure that our solutions precisely met the clients’ demands.’

Both of these projects required close collaboration on a tight schedule between Carbo-Link and Southern Spars, which had built Galateia’s mast and was in the process of producing Rambler’s new mast. ‘It was an enjoyable and efficient process,’ Axel Strauss, Carbo-Link’s project manager for Galateia and Rambler explains. ‘Clear timelines were established and engineering requirements from both companies were shared, analysed, iterated and signed off.’

Main picture: the maxi Rambler 88 sporting a brand new rig after a major refit, which included elliptically profiled solid carbon rigging from Carbo-Link, custom made to fit the yacht’s lighter new Southern Spars mast. The two companies collaborated closely on the rig design and engineering and the yacht was racing in the Giraglia just five days after the new rig was stepped...

Retrofit project
Galateia’s rigging upgrade – which included elliptical solid carbon lateral rigging, forestay and elliptical hybrid running backstays – was part of a wider overhaul to give Galateia a performance edge over her rivals in the fiercely competitive Wally fleet. ‘Carbo-Link was chosen based on the proven track record of our elliptical rigging,’ Wilkinson says. ‘And because Carbo-Link’s solid rigging delivers a significant reduction in the sectional size and frontal area for the equivalent stiffness compared with any other rigging currently available.’ Indeed, a useful drag reduction could have been achieved even with Carbo-Link’s round-profile rigging and this was amplified substantially with Carbo-Link’s elliptical carbon rigging.

Another important reason for choosing Carbo-Link solid rigging was the simple inspection, service and maintenance procedures. Carbo-Link’s rigging is inspected visually and with NDT if required on-site, it does not need to be sent back to the manufacturer for service and inspection. Off-site service is both costly and time consuming, and removing this requirement allows Galateia to reduce annual running costs.

‘We measured the existing rigging in situ to ensure the new rigging matched the exact lengths and geometry,’ Strauss explains. ‘This was then modelled to define all subsequent engineering.’ End fittings were designed and custom made to interface seamlessly with Southern Spars’ internal tangs. ‘We also built the threaded interfaces – threaded seats – at an early stage and tested them on the mast before we produced the rigging,’ Strauss says.

The completed rigging was coiled onto a pallet – forestay uncured and elliptical lateral rigging part-cured – and delivered by truck to Galateia’s shore base in Palma. The cables were then fully cured on site and stored ready for dressing and stepping. Final curing on site had already been factored into the manufacturing schedule and all materials included in the package price. The elliptical hybrid carbon backstays were delivered fully cured and coiled, ready to go.

The dressing was managed by Galateia’s team, assisted by Carbo-Link’s Murray Jones. Every cable fitted as designed and after checking all of the interfaces, the boat was launched and sea trials commenced with a full race crew in the Bay of Palma. ‘On the first day of sailing with the new rigging and rig modifications, the rig was tuned and locked-in better than it has been in the past,’ says Mike Hall, captain of Galateia.

Rigging for a new mast
Rambler 88 upgraded to a new, cutting-edge mast together with a Carbo-Link rigging package which included elliptical solid carbon laterals, forestay and elliptical hybrid running backstays.

‘We chose Carbo-Link because of their technical expertise,’ says Mick Harvey, Rambler’s team manager. ‘We required a robust package capable of offshore sailing, but performance orientated. We believe Carbo-Link have delivered this with their rigging package.’ 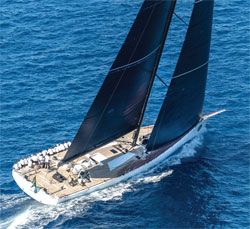 Above: the Wallycento Galateia went back in the water this spring after a major refit that involved retrofitting new Carbo- Link elliptical solid carbon rigging to an existing Southern Spars mast.
Below: the new rigging cables have significantly smaller sectional sizes and frontal areas than the bundled carbon cables that they replaced, resulting in a useful reduction in aerodynamic drag. The new rigging also won’t ever need to be sent away for servicing, so Galateia should now spend less time out of action and more time sailing.

A part of the design process was optimising the size and strength of the cable end fittings to the required working load, using Carbo-Link’s GL certified safety factor of 2.35. Carbo-Link engineered the rigging terminations to fit the mast interfaces. As with Galateia, the two companies collaborated closely on spreader bend detailing.

Rambler’s lateral rigging and hybrid backstays were delivered fully cured and coiled, ready for dressing. The forestay was delivered uncured at the same time and cured on site prior to dressing. After technicians from Carbo-Link and the mast supplier, working alongside the Rambler team, had dressed the mast and thoroughly checked all the details, the new mast was stepped and sea-trialled over three days. Rambler then headed directly to St Tropez and was racing in the Rolex Giraglia Regatta only five days after stepping day.

‘The success and smooth running of this project is a testament to the efficient collaboration between the Rambler team, Carbo-Link and Southern Spars,’ says Carbo-Link’s Murray Jones.

Two successful outcomes
Both yachts’ crews were impressed with the performance of their Carbo- Link rigging in sea trials and in race conditions. They reported much improved mast and sail stability, no creep or bedding-in issues, and no concerns about chafe. ‘The masts were set up to dock tune numbers and only few minor adjustments were required during sea trials’ says Carbo-Link’s Murray Jones.

Galateia experienced minimal vibration under sail on one of the running backstays and this was eliminated altogether with the installation of a Carbo-Damper.

‘Both teams value the robustness and chafe resistance of their new rigging,’ Wilkinson says. There are other benefits besides performance. ‘Many race teams spend a lot of time and effort managing service schedules for their rigging. With Carbo-Link solid rigging that can be reduced to the absolute minimum as rigging health can be monitored on-site. We look forward to following both Galateia and Rambler in their offshore and inshore regattas.’